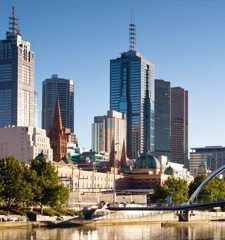 Melbourne is the second most populous city in Australia. Melbourne benefits highly in education, entertainment, health care, research and development, tourism and sport, making it also one of the world’s most livable cities. Often called Australia’s “cultural capital”, Melbourne is known for Australian impressionism, Australian rules football, the Australian film and television industries, and Australian contemporary dance such as the Melbourne Shuffle.

Melbourne has a highly diversified economy with a strong focus in finance, manufacturing, research, IT, education, logistics, transportation and tourism. Many of Australia’s largest corporations headquarters are based in Melbourne providing a strong economic base.

According to The Economist Intelligence Unit Melbourne ranks however as the fourth most expensive city in the world to live due to its worldwide cost of living index in 2013.

With this background and focus, our trainers understand the local issues and responses from workplaces and include many case studies from the local Melbourne Area.

We have a range of trainers available in Melbourne. Specialties include Call Center training, Telephone training, Customer service, Conflict Resolutions and Personality